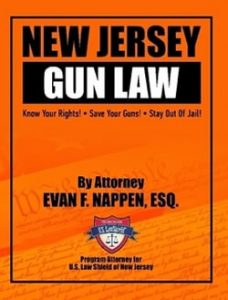 Carrying a gun without a permit in New Jersey

According to New Jersey gun laws, if you carry a gun outside your home or your business, even if it’s just in your car, without a carry permit, you can be charged with a second-degree crime. It is punishable by 5-10 years in prison and up to $150,000 in fines.

Exceptions apply if you are carrying it to or from a gun repair shop, firing range, or a hunting location.

Who is allowed to carry handguns without a permit

What happens if you are traveling through New Jersey state but don’t have a carry permit?

To avoid getting charged with unlawful carry, make sure you follow the rules when transporting a handgun in your car or between locations. A gun must be unloaded and enclosed in a securely fastened gun safe, a case, or locked in the trunk of the car. Ammunition must also be locked and stored in a secure case or box or far enough from the driver or passenger as to not be easily accessible to them.

As an exception, one may carry without a permit or firearms purchaser ID when going to or from a shooting range or hunting location.

If you are carrying a rifle or a shotgun, you need to be able to show your firearms purchaser ID if asked by a law enforcement officer.

If you find yourself in a situation, where you might be charged with unlawful possession or carrying without permit, don’t hesitate to call a lawyer. Evan Nappen Law is a firearms, weapons & gun lawyer in Trenton NJ, who will help and guide you through whatever you might be dealing with.