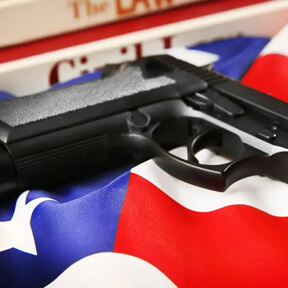 What are your rights and responsibilities as a gun owner?

The Second Amendment states that “A well-regulated Militia, being necessary to the security of a free State, the right of the people to keep and bear arms, shall not be infringed.”

The Constitution of New Jersey has no provision explicitly guaranteeing the right of citizens to keep and bear arms.

The state's firearms laws are among the most restrictive in the country.

For example, most states in the U.S. don’t require a permit for open or concealed carry, but New Jersey is one of the few states that makes it practically impossible for gun owners with the exception for police officers or others who require to carry in their line of duty.

In the state of New Jersey, a citizen has the right to obtain a permit to purchase a firearm.

According to state law, purchase permits/identification cards are supposed to be granted on a May-Issue basis. Some issuing authorities have been known to deny purchase permits and ID cards arbitrarily.

New Jersey has two mandatory sentencing laws that apply to convictions for gun and weapons charges:

The Graves Act applies when a person was convicted of unlawful possession, defacement of a firearm, manufacture, transport, or disposition of an assault firearm, and more.

The NERA applies to several first- and second-degree crimes of violence that may be committed with a gun or another weapon, such as murder, kidnapping, aggravated assault, robbery, and several others.

Charges for weapons offenses include:

If you find yourself charged with a weapon-related case, you’re going to need an attorney who knows what they’re doing. Attorney Evan Nappen Law concentrates in gun rights & weapons charges in New Jersey. Contact us today!